About a month ago I learned about Ricketts Point Fine Foods ice-cream. To my great disappointment, it appeared that they were a wholesale business and didn’t make sales direct to the public. This was only realised after I had scrolled through the list of ice-cream flavours available on their menu. A bit more sleuthing discovered that their ice-cream featured on the menu of the Old England Hotel in the Melbourne suburb of Heidelberg 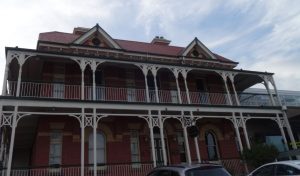 So it was that I found myself dining in the bistro area of the Old England a couple of weeks ago. The sight of the slices of cake going past my table whilst I enjoyed an entrée of garlic prawns almost tempted me to change my mind about what I was getting for dessert. Although I strongly considered asking for a slice of a delicious-looking slice of chocolate cake with gooey caramel to take away, I held firm with my original intent. 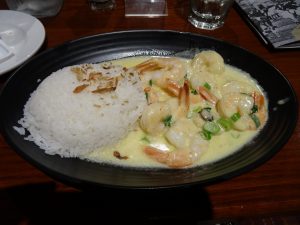 The real reason that I had trekked all the way over to Heidelberg was to sample the Rickett’s Point ice-cream platter – a combination of three different flavours for $15. On enquiring as to what the flavours were on offer on the day of my visit, I was told salted caramel, raspberry and chocolate. I always have reservations about chocolate ice-cream but I decided to go ahead and order the platter.

The presentation of the three flavours alone was worth the trek. The taste of each scoop was just the icing on the cake. The ice-cream came out in three individual glasses on top of a white rectangular platter and a single teaspoon. A single scoop was in each glass which were all adorned with artful garnishes. It was at this point that I realised the platter was designed to be shared. It was too late to do anything else but meet the challenge of eating all the ice-cream myself. 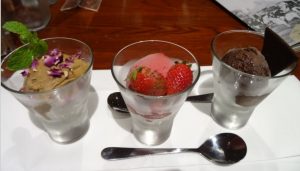 The star performer though was the final scoop which was the salted caramel, something that I have since learned is a silver medal winner for Rickett’s Point. It was garnished with rose petals and a sprig of fresh mint. The rose petals gave it an interesting texture but it was the mint that I was blown away by. Although it was clearly a garnish, I decided to conduct an experiment and broke up the leaves so that I could taste the combination of salted caramel with mint. I was immediately glad that I did as the combination was amazing and something that I decided then and there that I would try and replicate this flavour combination myself.

Stay tuned for an update on the result!